If you would like a hard copy of the pattern, but are unable to print it, you can purchase a hard copy and have it mailed to you for $5 (includes postage):
About the Chart: When reading the chart, please note that the yellow shaded stitches are an overlap from the previous section, while the gray shaded stitches are an overlap from last month, to help you with placement.

Note that where the chart shows a backstitch in black, you can choose whatever color you like, just be sure to use 2 threads (if fabric is 18 ct or higher use 1 thread).

The backstitch shown in red, again can be in whatever color you like, but requires only one thread!

Also, be aware that because the pattern is being released in installments, some areas in the chart may appear blank, but are actually areas reserved for a future installment. Be sure to leave those spaces blank!

Don’t forget to share your work (and your questions!) on the
​ One Point Mind Mystery SAL Facebook Group:
www.facebook.com/groups/opmmysterysal/ 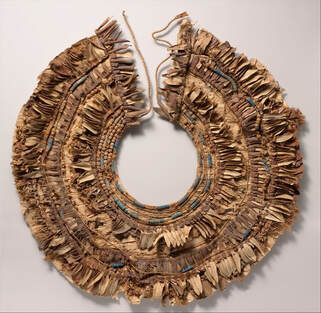 Embroidered floral collar from the tomb of Tutankhamun, Egypt. (Copyright The Metropolitan Museum of Art, New York, acc. no. 09.184.216.)
A Brief History of Cross Stitch

Did you know that cross stitch is the oldest form of needle craft?
​
Remnants of needle worked fabric have been found in Egyptian tombs! In fact, evidence of needlework goes back to the 6th century BCE. Needlework became more popular during the Tang Dynasty and spread into Europe through trading along the Silk Road between 618 and 907 CE. By the middle ages, cross stitch had spread all over the world.

In Europe, needle work became a cultural tradition, in which young women could demonstrate their suitability as good wives, by a stitching a sampler neatly and creatively. Sewing was a prized life skill during a time when hand sewing was a necessity. In the beginning, samplers were not displayed, but were often passed down within the family, as valuable design references.

Because linen fabric was expensive samplers were stitched on scraps of fabric. These fabric samplers could be stitched on long strips of fabric and rolled up like a scroll when not being used. Every available space was utilized, so designs might be stitched sideways, upside down, anywhere there was space to squeeze the design in.

The very first stitch pattern book wasn’t printed until 1524 in Germany. Until that time, women had to collect stitch patterns themselves. Samplers served as proof of a sewer’s skills and also as a reference for designs to refer back to. 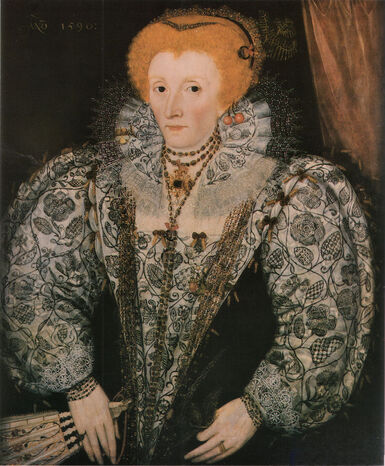 Example of blackwork on Elizabeth I's clothing.
By the 16th century, Catherine of Aragon, who was the first wife of Henry VIII, brought a kind of embroidery called blackwork from Spain to England. Sometimes called Spanish blackwork, it was style of embroidery influenced by Islamic Moors in Spain from 756 to 1492. It traditionally used black silk thread on white fabric to decorate cuffs, sleeves, and collars of shirts, smocks and chemises. Blackwork was also done using black wool thread on linen, or even different colored thread or fabric. The technique became quite popular in England at that time because of how it looked had an appearance of lace, which was rare and very expensive. Black work is considered the precursor to modern cross stitch.

In Eastern Europe cross-stitch was a popular folk art used to embellish a number of household linens such as tablecloths, napkins, dishcloths, and bed linens. However, samplers were what made cross-stitching popular throughout Europe. When printing developed, pattern books aided in the spread of the popularity of cross-stitch. Patterns were printed in black and white, leaving the stitcher to determine what colors to use.

​The earliest surviving stitch sampler is from England in 1598 and stitched by Jane Bostocke. Her use of design motifs were proof that she worked from a pattern book. 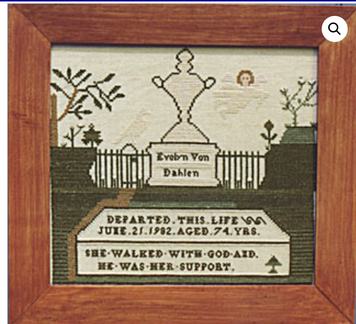 Mourning Sampler from 1832 America
The function of samplers began to change by the 17th century, becoming educational tools not only teaching stitching skills, but also literacy and morality through stitching letters, numbers and biblical verses. A particular kind of sampler developed in England and America during the 18th and 19th centuries which were called Mourning samplers, which were made to contemplate death.

​The Müller orphanages of Bristol were distinct in their use of red thread on white fabric and were used to teach alphabets and numbers. They also served to teach girls valuable skills to help them gain employment, with the samplers being used as a reference for prospective employers
Samplers appeared in the school rooms in the form of maps and stuffed globes. The complexity involved in making these helped train young women the necessary skills to make and repair clothing.

Samplers remained popular in Germany, Holland, Britain and America through the 17th century. By the 18th century samplers began to be designed and displayed to show off a young woman’s stitching skills to visitors and potential spouses. These display cross stitch samplers became more and more creative over time and included personal images such as houses, local events and scenes of life at the time. 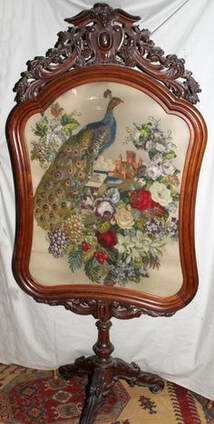 example of Berlin Woolwork
Sampler Cross stitching declined in 19th century as it was being replaced by Berlin woolwork, where nature designs were printed on canvas and stitchers used wool to stitch over design using other stitches including cross stitch for household items such as fire screens, pincushions, purses, cushions, bell pulls, footstools and more. By 1840 there were 14000 patterns available in Britain with complex, colored charts that included many new shades of colors. In 1890, the Germany company Zweigart created Aida, a cotton fabric specifically designed for cross stitch. It has a distinctive 4 thread weave that allows for the even division of the block to accommodate fractional and specialty stitches.

​Embroidery of all kinds began to decline in the late 19th century with the introduction of an embroidery machine in 1828 and the Singer sewing machine in 1851. Factory made clothing dropped the price of clothes and linen, making hand sewing a less important life-skill. Both World Wars would further decline interests in embroidery as women were removed from schools to help with the war efforts. What little stitching remained were with those few who still had leisure time to embroider, rather than cross-stitch, patriotic-themed sampler designs.
Britain managed just barely to keep cross-stitch alive from the 1930’s to the fifties, thanks to pre-stamped cross stitch kits. In the 1960s, cross stitch began to become popular again as women regained more leisure time. Many used patterns from older kits and patterns and some began copying old samplers, which brought cross stitch back to its popular roots. Cross-stitch has been slowly, but steadily gaining popularity ever since. Today cross stitch is the most popular form of needlework today.
​
There are three main kinds of cross stitch:
1. Stamped: the pattern is printed on a cotton fabric (not Aida). Projects are usually for quilts, bedlinen.
2. No-Count: the pattern is printed on Aida (usually) with colors that wash out when the project is finished.
3. Counted: stitchers follow a pattern chart printed on paper (or online). Patterns can be designed for any fabric.

Sources
http://juliesxstitch.com/history-of-cross-stitch
https://www.thecrossstitchguild.com/cross-stitch-basics/stitchers-study/threads-of-history-by-jo-verso.aspx
Please note: This design and chart is © (copyrighted) by A.S. Galbraith (One Point Mind) 2021. You are granted a limited license to stitch this design for personal use only. Under this license you may print a working copy to stitch from. This design and chart is exclusive to A.S. Galbraith (One Point Mind), and only available to download via the website: www.onepointmind.com